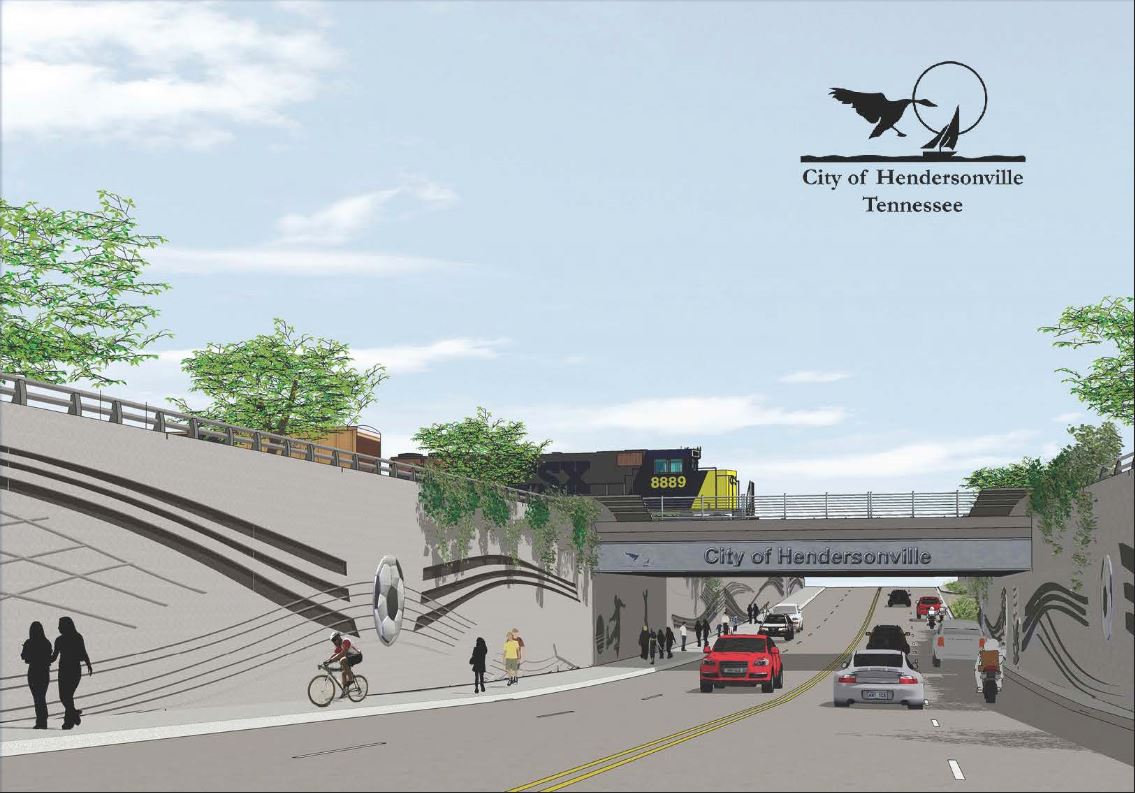 The SLIC Grade Separation & Safety Improvements Project (which includes the Saundersville Local Interstate Connector (SLIC) or “the Project” hereafter) will improve safety and relieve congestion in the corridor that connects US-31 (East Main Street traversing the heart of Hendersonville) to SR-386 (Vietnam Veterans Boulevard) a freeway that serves as a major transportation lifeline for the community. SR-386 is an important connection to I-65 and downtown Nashville. The Project will eliminate an at-grade rail crossing that causes traffic to queue up an expressway ramp and onto the SR-386 freeway. Oncoming traffic approaches this vehicle queue at speed (65 mph) with the potential for a serious crash. A video showing the queuing is provided in the Supplemental Materials to this application. The Project will also realign the road that connects the interchange to US-31, a major east-west arterial, to improve flow and safety. Two signalized intersections will be enhanced and one removed.

Winston Hills Parkway is a local street that currently connects US-31 to the SR-386 freeway interchange with one lane in each direction and an at-grade railroad crossing. Eastbound traffic exiting the freeway for US-31 must turn left on Saundersville Road into a right turn lane for Winston Hills Parkway, cross the CSX tracks, then to US-31. Congestion occurs when traffic is stopped by a train crossing at Winston Hills Parkway. The existing Saundersville Road traffic signals at the ramp and at Winston Hills are both tied to the rail crossing signal and are preempted to all red when a train goes through, with the result that the whole roadway network freezes. Elimination of the preemption will improve the traffic conditions and increase safety. There are 14 daily trains (12 freight and 2 switch) traversing this crossing according to Federal Railroad Administration data; during this time, it is common to have vehicles backed up onto the freeway during peak hours.

The Project will create a new road alignment between US-31 (East Main Street) and Local Route 6098 (Saundersville Road), located approximately 0.14 miles west of the State Route-386 (Vietnam Veterans Boulevard) freeway interchange with Saundersville Road. A new bridge will be constructed for the CSX railroad over the proposed connector road; this will separate rail traffic from vehicular traffic. The existing at-grade railroad crossing on Winston Hills Parkway, located approximately 0.15 miles east, would be permanently closed. The Project will also widen US-31 to add turn lanes for the connector road and realign Saundersville Road for a new intersection with the connector road.

In summary, the Project will:

Collectively, these investments will improve safety, mobility and connectivity as:

While the SLIC Grade Separation & Safety Improvements Project addresses multiple evaluation criteria for the BUILD program, improved travel safety lies at the heart of this Project. This BUILD grant, when combined with the City's match and a contribution from CSX Corporation, positions the City of Hendersonville to immediately move forward to address issues that have become a local community and Tennessee Department of Transportation (TDOT) concern. Additional traffic growth is anticipated at this location as the available large tracts of residential development in the vicinity of the interchange and connector are currently or are soon anticipated to be developed as Hendersonville's part of the metropolitan Nashville economy expands, increasing the number of vehicles traversing the existing grade crossing and unlit stretches of the corridor.